I will not be cowed, the Adventures of the Dark Chocolate Cow
307 Hits
0 comments
Read More
26 July 2018 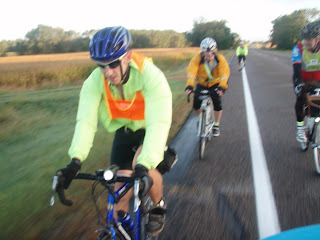 692 Hits
This past weekend marked the Apple Valley 600k.  Even though it starts 20 miles from my house, I had never done this particular 600k before.  Last year was the first year and I was at Cycle Oregon.  Since Rob Welsh does the routing and has a great feel for roads and routing, this was one I did not want to miss.

I hadn't felt very well for the week preceding this brevet, not exactly sick, but not jumping up and down with excitement (as usual).  In fact, at the ride start, I almost didn't.  I had a really odd and irritable feeling, almost as though I had reached a low point in the ride (weird to have your low point at the start).  The weather had just cleared and it was gray and still dark for the most part; temps were in the 50s so it was chilly and I was wearing a long-sleeved jersey and a wind jacket.

As we pulled out of the AmericInn parking lot, I wound up at the front which is very odd.  In fact, I wound up at the head of the pack for almost 5 miles which is even odder.  Martin finally came zooming up behind me and said as much. I shook my head and said "luck of the draw".  As we rolled out of Apple Valley at about 18 mph, the sun was coming up and the sky was beginning to clear.  Many passed me and eventually, I am pretty sure I was near last.  I was in such a blue funk that I didn't really care.  I rode a little with Bob and with Andre, but pulled into Cannon Falls alone still averaging 17.1.  I quickly signed in, filled bottles and got going.  I was paying particular attention to getting enough to eat and drink, I have a habit of not eating enough on day 2 so I wanted to start well.

I caught up with Andre and we rode together until just after Lake City.  There was a pretty nice tail wind and we continued to make fast progress.  At Lake City, I had some banana bread, V8 and chocolate milk.  Then I told Andre to go ahead.  He is a bit faster on the hills than I am currently (still got that bad hamstring) and I didn't want to hold him up.  I told him I would meet up with him at Plainview (mile 100), historically, most have lunch at this control.  The ride to Plainview went well for me, I took the hills as I could.  There was actually another woman on the ride (for once) and she recognized me and said hello.  For the life of me I couldn't remember her name or where I knew here from.  It had clouded over again and since I had just ridden this section 3 weeks earlier (in the 400), I knew it well.  The hills did slow me a bit and I was down to averaging 15 mph when I rolled into town. 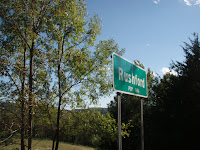 At that point, I figured Andre would be at the control, but he wasn't.  Ken and Marlin were and took off about 2 minutes before I did.  I had some food, got water, and only spent a few minutes here figuring I could catch them.  Strangely, no matter what I did, I would catch sight of them for the next 40 miles just about a mile ahead.  The ride to Elba was quite fun on the rollers with some nice views.  Finally, a long descent into Elba and a really pretty climb out up onto a long section of rollers.  I listened to music and chugged along at a pretty decent pace.  Finally, I rolled into Rushford, still averaging 15 mph at around 4:30 pm.  Rob greeted me at the Windswept in and I grabbed some soup and food before the 100k out and back to La Crescent.  I left with Ken and Marlin and we basically stuck together until La Crescent.

The ride to La Crescent was partially along the Root River Trail and was beautiful.  Lush and green wiht flowers, the river itself was clear enough to see the bottom when we passed close.  From there we ascended a few short hills and descended along a wildlife refuge to LaCrescent.  There the mosquitos were out in force, alas I brought no repellent.  I called IronK to check in since my cell phone worked and left with a group of 4 (Ken, Marlin, George and Al).  Ken and Marlin soon outpaced but I wound up riding with George and Al until we got back to Rushford and around 9:30.  I planned to leave at 2:00am.

Rob does a great job at the Windswept Inn.  It's a refabed house Norman Bates style with a kitchen and many bedrooms.  I had some mashed potatoes and lasagna along with fluids and organized before hitting the sack.  I also finally figured out that the woman was the other randonneuse from Minnesota.  I had mistakenly heard that she had moved to Arizona.  What a dolt I am sometimes.

At 12:30, I awoke to a light shining in my eyes.  This turned out to be the last randonneur to come into the control.  Rob had actually gone out to call him (which required a car trip) and wasn't around.  He was about to search other rooms, but I stopped him (no need to wake others).  I showed him the kitched, bathroom, and left a note for Rob along with his arrival time.  No luck really getting back to sleep.

At 2:00, George was getting ready to go and we departed together.  Lara said she would be following about 30 minutes behind us.  We rolled out around 2:20 towards Eyota.  The climb out of Peterson is much more enjoyable than Cty Rd 30 and I was happy to not be completely wiped out at the top.  We chugged along the rollers for the next 20 miles until stopping for coffee at the Amish Market (open at 4:30 am).  Coffee is something Rob forgot to provide so both of us were jonesing.

Rollers in the dark are really not fun.  By the time you figure out you are climbing, it's too late to strategize and you can't see the end.  Progress was slow, but we finally rolled into Eyota at about 6:15.  Ready for breakfast!

I ate some things I would never eat (like a strange breakfast sandwich with mystery meat).  I drank and ate all I could and felt much better for it.  Lara and another guy came into just as we were getting ready to leave.  Martin also showed up in a car.  He apparently lives a mere 7 miles away, so he had ridden to Eyota, arriving probably about 8:00 the previous night.  He then went home and slept a nice night's sleep and was returning to finish the ride.  What a guy!

George rode ahead of me and I found myself dragging for the next 10 miles.  Martin gave me a push about 45 minutes later as he passed me (he'd stopped at the control to chat with others).   I finally caught back up with George just as we turned onto Hwy 63.  We dropped down into the Zumbro Valley on Ctry Rd 7 which was really pretty (last time I did it was at night).  At Mazeppa, we stopped to shed clothes, it was heating up quick.  Finally, we rolled into Zumbrota at about 10:15.  Only about 80 miles to go.  We had sped up considerably since the sun came up and were pleased.  We also caught up with Al, who had left the overnight about an hour before us.

5 miles later in Wanamingo, the wind started kicking up.  It was now about 11:00 am and we were headed west for the next 30 miles to Faribault.  Unfortunately, the wind was also from the west.  The three of us rode apart by about 1/4 mile with George out in front, then me, then Al.  It was a struggle to maintain progress and I was thankful we had left the overnight when we did since there was no time crunch.  Still, a 20 mph wind in your face for hours takes its toll.  At Nerstrand, we finally stopped for a rest and got together, agreeing to try to draft and save some energy.  I hoped that Lara might catch up to us before we left, but she caught up about a half mile later having gone all out to catch us.

The four of us rotated for the next 10 miles to Faribault with George doing some monster pulls.  I did my best, but still felt as though I had plaster dumped on my shoes.  We rolled into Faribault and ate and drank for about 40 minutes - far longer than any of my previous controls had been.  After Faribault, we continued to fight the wind for another 10 miles west before turning north to Lonsdale.  It was here I started feeling that plaster getting heavier.  I figured it was fluid and started drinking more.  No effect.

We rolled into Lonsdale and I had a coughing fit.  Others were also tired and we stayed about 40 minutes again.  I split a piece of pizza with Lara and had a Naked protein drink along with some water.  My knees were hurting too so Lara gave me a couple of french pills "don't know what they are, but they work".  They did work.

We rolled out of Lonsdale with only 28 miles to go.  I've done this section a few times, but I started to wonder if my seatpost were too high because my hamstring started hurting.  George and Al went ahead while Lara stayed with me.  We weren't sure if we were going to make it by sunset and no one wanted to be alone in the dark.  After raising the seat, I was much better and we cruised through Lakeville and back to Apple Valley for the finish, just before 8:00 pm.  Not my best time, but considering I spent almost 5 hours at the overnight, I was pleased.

We met Rob and other in Old Chicago for drinks and food.  I had to drive home (frightening) so I didn't linger.  I felt pretty good as I left and would have stayed longer if I had had another way to get home.

I got home at around 9:00 and took a bath to rinse off the salt and grime.  It was at this point that I noticed that I was oddly fatigued, nearly short of breath.  Strange, I thought, I must just need a good night sleep.

At 12:30 I woke in wracking pain.  I tried to sit up but couldn't.  I was all I could do to wake IronK and get her to take me to the ER.  They pumped me full of fluids after tests showed my hemoglobin 30% below normal and some other oddities in electrolytes.  I went home at 6:00 am thinking I would nap and go to work.  Alas, 4 hours later, my weight had ballooned 20 lbs and my kidneys were stressed out.  I was retaining fluid like crazy.  Back to the doctor - more tests and a bunch of diuretics later, the diagnosis remains a non-iron deficient anemia of unknown cause.  But at least I don't weigh 180 lbs.

It's now 6 days later and I am still extremely fatigued.  I couldn't do the Rochester 300k today and that made me sad.  I had hoped to see my Rochester friends one more time before next year.  Still waiting for someone to figure out what is causing the anemia.  But two doctors are working on it.   I have high hopes of making the last brevet of the year, the Apple Valley 200k on October 2.  Stay tuned.
Tags:
Ride Reports
Delano-Henderson-Chaska Permanent
To sleep or not to sleep, that is the question