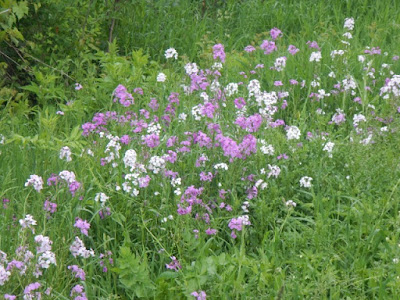 Sid, you got no game for me!

The final climb out of Lodi is a series of big rollers and the sun is behind us, the sky clearing rapidly as the golden hour approaches.  With a northeast wind, we have a bit in our face, but the wind has calmed dramatically since the afternoon when it was such a help.  I completely dry out except for my shoes.  I even pulled out my raincoat and wore it to dry it off in the sun.
Many don't like this section, but I enjoy the big, green, open fields.  It's a fun contrast to the forests and wetlands of the previous 40 miles.  I take quite few pictures here of old barns and a fantastic sunset as we roll into Columbus, only 79 miles left.

At Columbus, we enter the control and the first thing I see is an abandoned cue sheet with a pair of long finger gloves still on top of it.   It's really the first hint I have that others might not have my appreciation of the rain.  I wish I had eaten more here, but I made a valiant attempt.  I also realized that I had forgotten caffeine tablets and, not wanting to aggravate my stomach with HFCS, I tried buying some.  Seems that caffeine tablets are out of favor at truck stops and I wound up with some kind of caffeine plus Chinese herb capsule.  I'm going to have to find out what was in them that did not work.  They didn't keep me up at all and instead seemed to make me not want to eat anything.  Not really a good thing.
Temperatures plummeted with the sun and by the time we left, it was in the low 40s heading for the 30s.  My 10 year old tights were just barely adequate with rain legs and I realized replacing them was in the near future.  When I get cold, I tend to get sleepy and by the time we hit Lake Mills, I was dozy and tried eating all kinds of sugar to wake up, but things seemed very unappetizing - even fresh cinnamon rolls....we wound up stopping for a brief nap on the side of the road an hour later.  At this point, we were leapfrogging with the Danhaus tandem and some others.  At the final control at Whitewater, I got some chocolate milk down and a few potato chips, but nothing else.  Only 18 miles left.
The three of us, now joined by a third 400k rider, Woody, all left and I could not stay awake.  I tried all my usual tricks and even resorted to punching myself in the face.  Geez, what was in that stuff?  Alex finally gave me a Starbucks coffee drink and I pepped up immediately to finish the ride at about 18 mph.  We rolled in at 4:41.  Nearly the same time as last year.
I don't usually bother, but I got an email from Bob a few days later thanking me for such an epic ride.  I went and looked and the overall DNF rate for this was about 30% for both the 600k and 400k.  This somewhat surprises me, but maybe it's just the comparison to rides like the Gold Rush, 50 degree pouring rain all night in the mountains, or to the Titanic 400k in Arizona - 30 to 50 mph headwinds for 125 miles.  Or maybe I burned up part of my amygdala in Florida.  Either way, I'll be back in 2 weeks for the 600k with Lisa and she can be the judge.
Beware the Silent Bonk
Postcards from Florida: The Randonneuses Roll in t...