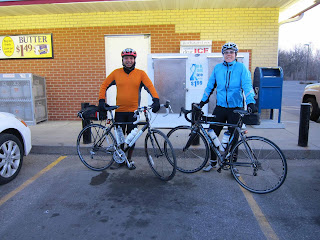 Wind Gods are fickle: Back to the Sakatah Hills Permanent

936 Hits
It appears that the weather gods have taken a big leap forward here in Minnesota and it's suddenly spring.  Road Pixie is more used to snow than shorts, but found herself riding at 12:30 am on March 31 in short sleeves and shorts.  Thus it must be time to find out what the actual pavement looks like on the Sakatah Hills Permanent.

Road Pixie had some company this time in the form of Ahi, who is also currently planning to do the Cascades.  So we set out from the Kwik Trip figuring out at the start that we were riding on Easter Sunday and some things might not be open.  Nonetheless, a start is a start.  Rob saw us off.  I got to wear about 3 layers less, just a long sleeved jersey and my favorite jacket and tights.  Temperatures started in the mid 50's going up to about 65 during the day.  For Minnesota in early April, it's a shocker - I'm still looking for snow by default.

However, warm weather in April also means big winds.  These days wind is my friend, it's the only way to simulate one of the big climbs out west that go on for 30 miles.  But it does beat you up more than a nice ride up a mountain pass does.  Starting this ride was like riding into a wind tunnel, winds from the south-southwest at about 12 mph.  They eventually became westerly (just in time for the turn onto the trail of course) at Faribault.

The trip to Fairbault was a long fight against that wind.  Without the snow and with the longer daylight, it was a far cry from the frigid sunrise the last time I did this permanent.  Though it's definitely easier to ride at 50 than 15, there wasn't nearly such a sublime feeling to the ride out.  In fact, I found myself more focused on beating against the wind than watching what was going past.  Ahi and I both fought the wind alone on this segment instead of pairing up.  We must both have been in a masochistic mood.

Finally at Faribault, we opted for the sure-fire open Kwik Trip instead of the maybe open Hyvee grocery store as a control.  Turned out the Hyvee was open but better safe than sorry.  A quick 15 minutes, some peanut butter cups and V8 later and we were back on the road.  This was where I started feeling the effects of my first mistake of the day, taking Sustained Energy.

I had a massive failing with Sustained Energy last year on my 600K after slipping into hyponatremia and nearly collapsing at mile 300.  Though I am sure it is a great product, it really does require that you take Enduralytes with it and I hate pills.  So I switched last summer to Infinite Nutrition, a custom sports drink that you can program your electrolyte needs into.  That has worked much better, but I was out and thought "gee, I'll use the rest of this stuff in the cupboard".  Not a good idea, maybe it's the soy, maybe it's the taste but the product makes me drink less and get less.  By the time we were halfway across the trail, I was having serious cramps in my quads.  We paused to raise my seat, it was still to low, my other mistake.  Those two errors made what should have been a really great ride into an okay one.  Live and learn.

In any case, the trail was amazingly rough too.  BigG says the trail association just got some money from the Feds and I hope they spend part of it on fixing cracks!  With the big headwind, Ahi and I spent the whole time taking a break and riding at about 13 miles an hour.  The tree buds were just coming out and there were a fair amount of birds, but mainly the trail had the real sense of "hey, it's winter, where the heck is my snow?".

This time we did NOT miss the turn to Casey's in Madison Lake.  After some mishaps with spilling the Sustained Energy, we got off in about 25 minutes.  After 62 miles of massive headwinds, we felt like a little extra rest.  North we went on Highway 26, at last a crosswind.

That segment I rode in front.  Then we turned east onto MN99, my least favorite part the last time.  This time, we had a serious break from the wind.  The next 15 miles features a 20 mph tailwind!  The first 5 miles were actually northeast and I think we were in shock, because we only sped up to about 18.  At Le Center, Ahi was having some issues and needed to stop.  He said he would catch up so I went on alone.  At this point, the tailwind became dead one and I found myself clocking in at about 25 mph without working really hard.  So I put the gas on and picked up to about 30 mph.  What a blast!  Reminded me of the end of my last 300K in Arizona.

Sadly, all things must end and so did the tailwind.  I turned north to Lonsdale and still kept a good pace to the control.  I lingered there thinking Ahi must be behind me.  It was just about 3:00 when I got there.  Alas, he wasn't there and I left after 20 minutes with a liter of Powerade and the realization that I was dehydrated.  At this point, I'd worked my butt off for 100 miles and felt like soft-pedaling anyways so for the next 10 miles or so, that's what I did.  I kept looking behind me, but no Ahi.  Hmmm, perhaps I shouldn't have left him after all.  But I finally decided to get on with things.  The 4 mile stretch on Scott Cty 8 is not fun even with a little tailwind. The buzz strip just makes for too tiny a surface.  But when I got to Lakeville and only 10 miles to go, I picked up some speed again only to lose it by failing to make every light in Lakeville.  No Christmas lights or shoppers this time and I could actually see since it was about 4:20.  I got back to the Kwick Trip at about 5:05.  Total time 10:09 with my GPS reporting 9:02 minutes of riding time.  Amazing how much time even quick controls stops soak up the time.  One of the best features of my GPS is that it records how much time I spend at controls and how much they cost the bottom line in terms of overall miles per hour.  It's a great training tool.

Ahi made it in about 10-15 minutes after me. I think I had just finished my chocolate milk when he pulled up.  He'd been chasing me for miles, but had a great time on 99 (that tailwind was spectacular).  I went home amazed at how much salt had accumulated on my skin.  The long sleeved jersey really kept it in place instead of letting it blow away in the wind.  No wonder I had so many cramps.  I took a bunch of Endurolytes and some Advil.  Nice piece of fish for dinner.  Another ride complete.

Next big ride is the Tombstone 600K.  I will see Rob there, but only at the start.  He's one of those riders that I say hi to at the start and don't see again unless it's an out and back, then he passes me as I am still headed out.  Only 10,000 feet of climbing, but Arizona has the same wind gods - let's hope they are in a good mood.
Tags:
Ride Reports
Road Pixie builds some wheels
Fountain Hills and Hot Tamales: 200K in North Phoe...