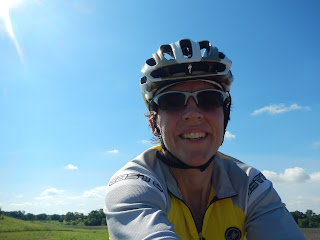 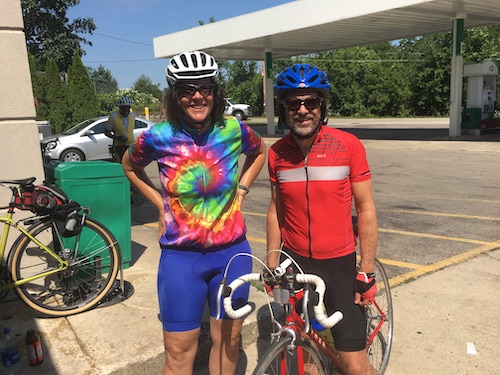 My cousin, Brian and I at the Eagle Control.

I've always maintained that everyone has adventures like I do, but people just don't talk about them. "No, it's just you" Deb told me a couple of weeks ago.  Perhaps and perhaps not.  The memorable rides are so often those with dramatic moments, not the ones where everything goes perfectly.  Like this ride....

I don't often get to ride with the club that I lead, I'm normally running around supporting, but this time I decided to go out and hang with the riders.  IronK was dressed as either a pirate, a nun or a roman emperor at GenCon (the biggest gaming convention in the world).  Clearly, I needed to get out and enjoy and I had a secret agenda!

So, at 7:00 am, I was at the start line along with 16 other people including my cousin, Brian Snarr.  Both of us were seriously injured at the nearly the same time 4 years ago.  I had a dreadful brain injury and he had a bad jump out of an airplane (that is bad for your legs).  We advise you to not do either of those two things.  While he was hospitalized, he read my blog and decided that riding a bike was a better pastime than jumping out of airplanes.  Now 4 years later, we got to do our first brevet (as an aside, I still don't want to jump out of an airplane).

The weather forecast was great (except for late in the afternoon).  17 riders rolled north out of Woodstock on Queen Ann Rd with everyone bunching together to chat and enjoy the day.  Besides my cousin, there were Brian Lewis-Jones and Sam Kling, two of only three to finish the Bleeding Randonneur series.  Dawn Piech was someone returning after a year hiatus.  George Mickleson was there for his second brevet ever and Dan Michael, another well-know GLR member was to be another friendly face along with Tony Wilkins, who had done the 400k pre-ride with me a couple months ago.

I spent many miles with Keith Bowersox.  I hadn't ever really gotten to know him before and passing 100 miles with anyone gives you a perspective on all the other ways people ride and enjoy riding.  It had been several years since I had ridden in a large group of people.  All through the day people seemed to hopscotch each other trading chats at controls or riding alongside each other.  The sun shone all morning and afternoon.

Keith and I have had long discussions about PBP in the last months.  He had been planning on going but is now uncertain after an accident 3 weeks ago broke his collarbone.  This ride was an experiment to see how things would go with it.  Still some discomfort, but he's a super strong rider.  I'm now a fan and hope he goes.

There is a part of me that always finds it painful to discuss or even be around discussions of PBP.  Probably ¾ of the people who were in my life before the accident departed in the aftermath.  The fact is that my current self emerged during many weeks of speech and physical therapy and is very different in a whole host of ways.  Every year, I look back on that time as a rough start to my current life – a life that is in many ways so very much happier than the previous one, but is still rooted a loss of sorts.

"Don't wait for me," said Keith at about mile 80.  Old me would have waited, new me didn't.  I'm not sure what I think of that.  I take people at their face value.

So at 90 odd miles, I walked into the penultimate control to a table of at least 8 riders all enjoying sandwiches.  It was about 90 degrees and without taste, the sandwich concept wasn't looking all that appetizing.  I found some quick drinkable calories, drained them and departed with my cousin. We leap frogged each other along to Hebron, the last control.  It was about here that I realized that even though most had left together, no one else was quite around.

We rolled into Hebron and I made good on a self promise to have ice cream at the Main Street Ice Cream Station.  There is still a mental appeal of ice cream, even if it's just cold now.

The 4 of us rolled out to a sudden strong wind from the north.  As we got to Queen Anne once again, 15 miles from the end, thunder clouds started rolling in from the north and we enjoyed a super tail all the way back to Woodstock.  The others poured it on and hit 30 mph in the flats, but I satisfied myself with 25 mph and less work.

The 4 of us finished within 10 minutes of each other and had a fun time welcoming everyone else in over the next couple hours.  Some had gotten wet and some not, but everyone had a smile and stories to exchange.  We shared a couple of pizzas, some beer and soda and cheered our fellow comrades.

I felt great from start to finish and it showed.  Despite some questionable pavement, my hip held up fine.  These long months of PT have paid off.  When I finally got around to looking, I'd ridden 125 miles with 4,500-5,000 ft of climbing in only 9 ½ hours with an hour off the bike.  Not a trace of soreness anywhere.

For many months, people have asked me whether I would go back to PBP.  Had the start not moved to the Rambouillet, I would never have considered it. I never want to pass the accident site again, only a few miles from the original finish.  So many things this year have flown in the face of trying something like this: it would be a solo event, I'd being going totally alone to a foreign country, the expense and the fact that I don't feel that I owe this ride anything. It's in the past.

But one thing I have learned in the last year is that the most important part of this sport is loving your bike and loving riding it.  When you do what you really love, nothing can touch you.  Good friends like Julie, Melanie and Lisa reminded me of that in the last year.  Sometimes we just want to do what we love, no matter what it is.

I think Keith figured it out at about 80 miles."This is your test ride, the ride to make a decision".  Sharp guy.

So the decision is finally made after all these months.  2 weeks from now, I'll be at the start of Paris-Brest-Paris.  And I won't be stopping for anything.