I will not be cowed, the Adventures of the Dark Chocolate Cow
274 Hits
0 comments
Read More
26 July 2018 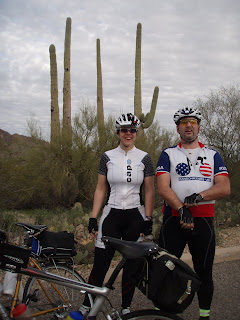 A fine day for a 300K - Saguaro National Park

567 Hits
February 27th, 2010 was the day of another fine brevet by Susan Plonsky.  This was a really challenging brevet on several fronts.  First, I got lost getting there.  I don't usually get lost, it just happened somehow.  I'm blaming the rental car or perhaps it's just what happens when you drive around at 4:30 am looking for people in tights.  Second, more serious, I had a chest contusion before I ever started the ride (an unfortuate accident 4 days before as I flew over my handlebars on ice).   I distinctly remember reading in the RUSA handbook that the single most important thing to bring to a brevet is an unfailing desire to finish the ride.  This one set a personal record for me, not because the weather was, shall we say, unpredicatable or because it's the first one I started late, but because it's the first one I have ever done where I had to make a real effort to take every breath.  I now have a new appreciation for the amount of work my rib cage does during the course of the ride.

I will say that starting late really was a bonus in this case.  Had I been on time, I would have missed a real treat of a ride with Eagle Eye Alan.  He and another guy were also running a little late and when we started at 6:15, he discovered that his Schmidt hub wire was broken.   He and I went back to the start for emergency repairs with Susan that took another 15 minutes.  I have to say, going back was one of my best decisions of the day.  If I had gone on, I might have been able to keep up with the other guy (whose name I don't remember), but I had a great time riding with Alan.  It's very seldom that you run into someone who is just about evenly matched with you so that riding together is a pleasure for 190 miles.  We both took turns fighting the wind, I got all kinds of information about the terrain we were riding through that I wouldn't have known.   Just a great experience.  So if Alan reads this, thanks for the ride.

When we finally got going, our first treat was a gorgeous sunrise heading out of Casa Grande.  I think it's the combination of the mountains, the giant cactus and the exapansiveness of the land that makes desert sunrises so vast and majestic.  It is simply one of those moving experiences that sets the tone for the day, like a big capital O at the beginning of a sentence.  The two of us cruised at around 18-20 miles per hour in a crisp 48-50 degrees.  All worries about starting late just faded away.  We continued east until finally turning to the south on Highway 79,  it was at this point that things turned interesting.  A sign ahead read Oracle Junction 36 miles.  So starts a very long hill, essentally 36 miles long but at only a 2-3% grade.  Though I had noted in in the elevation profile, I hadn't really thought much of it considering the fact that there was only about 4,200 feet of total elevation on the ride.  Being from roller country, I'm not nearly so used to sustained climbing.  We were also climbing into a mounting headwind.  If I hadn't looked at the profile and had Alan to reassure me that yes, we were going up, I would have gotten pretty depressed on this section.  The kicker was the optical illusions of the road.  Even though we were climbing, the road actually looked either flat or descending.  After about 9 miles, we caught up with 2 other riders, whom I remembered from the 200K in January.  Alan told me that hitting this hill too hard was a common mistake responsible for many a DNF over the years; I resolved to cut back a little after the contorl coming up.  At Tom Mix Monument (about 12 miles into the hill), we chatted briefly.  The sky was cloudy by this time and it was warming up, so we shed some layers and got back on the bike as quickly as possible.  The ride organizers had a nice setup with a bike stand for repairs, food and water all waiting for us.

The next 24 miles were long ones.  It's not very often that the low point of a brevet comes so early in the ride.  There has been quite a bit of rain and the desert is starting to green up (a rare occurrance).  Alan and I traded stories and he did a fabulous pull for the last few miles.  The wind continuted to pick up.  Finally, we made it to Oracle Junction.  A sigh of relief was audible and it was like the whole ride started over, we both picked up in spirits.  After a not-so-fast-because-of-the-headwind descent into the second control, we stopped at Walgreens for snacks, water, and a stretch.  This was also my first informational control.  I had read about them in the RUSA handbook, but hadn't used on before.  We were successful in naming the business on the corner of the street.  We'd gone 75 miles.

Parts of the next few miles I recongized from the Mt Lemmon ride in November.  The next 20 miles or so were windy, but had lots of rollers and a very fun downhill on Tangerine.  We then crossed underneth I-10 and turned onto Silverbell.  This was the worst of the wind for the day with a combination of a headwind and some not-so-happy pavement.  We went up a short hill called Rattlesnake Pass and joked about the fact that photographers on rides always wait to take picture of cyclists after they have spent hours ascending a pass and, bluntly, look like hell.  I had a flat just before Gates Pass; Alan graciously helped me change it.  More joking about his Yin (bad wires) and my Yang (bad tires).  Then we ascended Gates Pass which is about 2 miles of fairly steep climbing (not the worst, but probably has some short segments into the 8-10% range).  At the top, Alan texted his wife and I took some pictures; the view was spectacular  Then a screaming, twisting descent down to the last manned control in the wind. 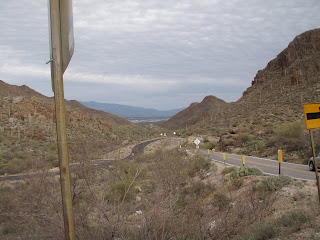 The first thing I noted about the descent, was the view of the valley below.  I knew we would be almost entirely downhill from this point on with a tailwind now.  But the wind was also kicking up a massive amount of dust.  You could see dust billowing down in the valley like plumes of whipped cream.  We met Susan for snacks, bottle filling and some last words.  Then off for the big finale. 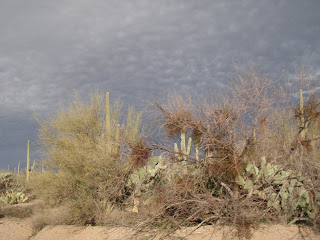 Even though the weather was supposed to have an ascending chance of rain at this point, the sun came out for the first time in hours and we got a real treat of a tailwind/descent on Sandario.  I took some more pictures as we easily spun at about 25 mph.  It's impressive when you ride at 25-30 mph and still don't feel any wind.  We turned briefly on Marana Road and discovered just how powerful the wind was; as a crosswind, it nearly blew me over.  We stopped at the Circle K for a bit of water and I put on a dust mask; I have mild asthma and I remembered the plumes of dust that were likely all around us.  That turned out to really be a good move for me.  Coughing with a chest contusion is exceedingly painful. 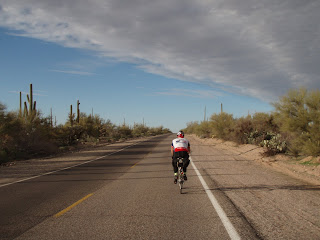 We turned north again and saw a beautiful sunset near Picacho Peak.  The wind started dying a bit but we still cruised at around 18 mph.  We stopped at a Dairy Queen at around 6 pm to put on reflective gear, turn on lights and make a final pit stop.  We also picked up another randonneur for the ride back.
The last 25 miles had a full moon and all the trappings of a great night ride.  We were very careful on our directions, between local knowlege, my GPS and some careful cue sheet reading, we didn't get lost.  At least a couple of others apparently did and missed Eloy.  Alan and I slowed up a bit and the other randonneur went ahead once we turned on Eleven Mile Corner.  We then needed to find the color of a ribbon on a sign (informational control) at 11 Mile and 287.  I can't figure out how we missed it.  I swear I looked at every sign about 4 times, but we could see lighting on the horizon (the storm was finally on its way) so we didn't dawdle.  I tried to remember as many other landmarks as I could and figured I had the tracks in my GPS as well.
We finally rolled in at about 9:15.  I wound up showing Susan my GPS tracks to prove we were on course.  The third randonnneur (who had gone ahead) also vouched for us being on the right roads.  I never got a chance to really say thanks - I'm always a little fried at the end of a ride.

This ride was really a great experience.  It isn't every day I get to ride with someone the whole time.  Most brevets in Minnesota, I am the only female and I see everyone at the start and then catch possible glimpses during the course of the ride.  I like riding alone, but there is a really nice aspect to riding with someone else as well.  As usual, Susan put on a great brevet.  I can't wait for the Tombstone 600K.  Just 7 short weeks away and the desert will probably be blooming.
Tags:
Ride Reports
Fountain Hills and Hot Tamales: 200K in North Phoe...
Dealing with "the-body-part-that-must-not-be-named...