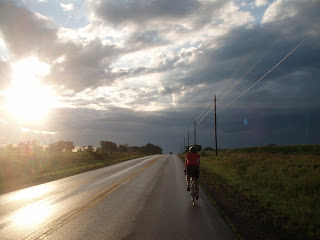 1027 Hits
After tearing my hamstring in the Cascades, I saw every possible health care professional I could think of: chiropractor, MD, physical therapist, massage therapist, master bike fitter, and acupuncturist.  Since this is an area of which I knew nothing, I figured each of these would have a piece of the bigger healing puzzle.  Opinions varied on how long it would take to heal, it wasn't like I didn't still have lots of rides that I really wanted to do.  Most agreed that it would be months - it takes a long time to heal a muscle and my tear was quite deep.  Happily, after the acupuncture, which I had never tried and really was amazed at the results, I got some good news: "you can ride this weekend", Dr Thuy said, "but no hills, no sprints, DO NOT TEAR THE TEAR!"

So this weekend's Iowa 200k was officially a rehab ride.  Chris Balser, the bike fitter, refitted the princess in PT mode with a very short stem and a fit that took pressure off the hamstrings.  I also managed to talk our friend, Barb, into coming along.  Barb is a surgical nurse, how better to do a rehab ride?  It was her first brevet as well and she is probably the first person that I have ever managed to convince that this riding is actually a good idea.  Her husband may never forgive me.

So we went down to Waterloo, IA.  I drive like I am 90 years old so Barb driving probably saved several hours in the car.  After an okay meal at the local sports bar, we had the misfortune of witnessing a drug deal in the parking lot.  This got us a lot of dirty looks from the dealers. We left very quickly.

The weather had been saying all week that there was a 0% chance of rain and that highs would be in the mid to low 80s.  So when we woke up that morning to rain, we were nonplussed.  Fortunately, it ended before the ride started and all we really had to deal with were some wet roads.

At the sign in, I had the distinct pleasure of running into familiar faces.  Nancy and Chad, from the Great Lakes 400k, were there on their first 600k (there were 4 brevets going on simultaneously).  Also, Ken, who I rode with last October, and some of the other Minnesota Randonneurs.  Most were doing the 600k which had the same route as the 200k until the 200k turnaround.  After brief directions from the RBA, we were all off.

The ride out of Waterloo was about 5 miles through the city.  It's really a very interesting town and I hadn't ever seen it.  We rode past farms and a huge John Deere farm equipment factory.  At this point, the sun was obscured by the passing rainstorm and it was about 75 degrees but very humid.  The purple clouds, sun, blue sky and deep green was really pretty.

Barb in the first leg of the ride
It was still very nice with an increasing tailwind when we rode into Oelwein (pronounced OL-WINE).  This is a really nice town, well kept, that had partially flooded the previous week in some stellar rainstorms.  We passed a cemetery with hundreds of flags up which was a really cool sight.  Since the flags were gone on the return, we suspect there must have been a special event going on that morning. 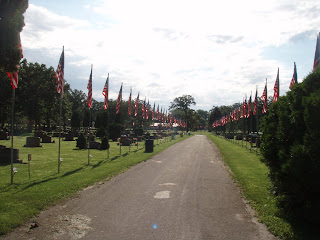 Flags in Oelwein
At the Oelwein control, we saw most of the 600k riders for the last time because about 2 miles out of town we looked ahead and saw three riders clustered around a bike, several others stopped, then continued on before we finally got to the scene.  In the group was Ken, Scott R, and another man.  Scott had broken a spoke and his wheel was unusable.  They were all on the 600k and debating how Scott would get back to Waterloo.  Happily, I had a Fiber-Fix spoke and in a mere half hour, we had the wheel working again. 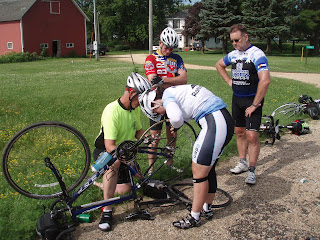 Typical DOT scene: 2 people do the work, 2 sit around and watch and
one investigative reporter takes pictures
We ran into Scott later in the day, though the fix worked, he wasn't feeling quite right and decided to turnaround near Volga and head home anyways.  I have to say that the fiber fix spoke is a great addition to any rando bag, but a pair of needle nose pliers helps too.
Barb and I made good time to Volga.  This part of Iowa is dominated by gently rolling hills (hence very little elevation change) with many well kept, small farms. 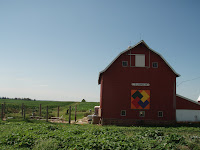 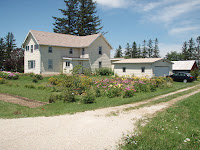 Farms in Iowa: Note the quilting pattern on the barn, this is a uniquely Iowa thing
By the time we hit Volga, it was about 11:30 am and it started getting hot.  After sandwiches at the Volga Convenience Store, we started back.  That really nice tailwind was now a headwind.
Just outside Volga, we went up the only hill on the entire ride.  It was about 1 mile long and after the Cascades, it didn't really even seem like a hill.  I was true to my rehab plan and Barb beat me up by several minutes as I patiently spun up in the lowest gear I had.  Not one pain in the hamstring.
At the top of the hill, the wind was probably about 15 mph coming from the southwest.  Of course, we were headed southwest for the rest of the ride.  The heat really started cranking up too.  By this time, my thermometer was registering about 96 degrees and it's reliable.  The wind, though it slowed us considerably, was a blessing in that it provided at least some relief from the heat.  No wind and the sweat would have just run instead of evaporating and cooling us.  Even so, by the time we got back to Oelwein, there were several 200k riders at the control, most looking a little heat stressed.  We made it quick since we only had 36 miles to go.
By Fairbanks, only 26 miles to go, Barb was feeling the heat and we made an extra stop for ice, V8, and endurolytes.  This proved to be very helpful.  I put a ton of ice in my water bottle.  This is one time I missed having a Camelback.  A Camelback loaded with ice water has enough insulation to keep water really cold for hours, bottles warm in about half an hour.  My face was caked with salt.  With the wind evaporating the sweat instantly, it's hard to judge how much sodium one is losing.  Both of us felt much better after a bunch of V8 and endurolytes.
In the next 10 miles, we picked up our pace and passed another rider just before the control.  A group of about 6 of us chatted for awhile at Dunkerton about the heat.  Everyone was feeling it.   Barb and I took off only to be caught by two others shortly outside town.  One of them, Tom, we wound up riding with for the rest of the ride.  Being a local to the area, he knew all the turns which saved us from having to think about navigating Waterloo at the end.
At the end, we cooled off before heading home.  I put on compression tights, a rare gimmick that actually works.  Barb had finished her first brevet ever and my legs were feeling fine.   All the riders we ran into along the way made it with plenty of time, some a little worse for the heat than others. 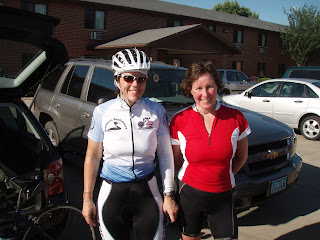 Me and Barb at the finish
The forecast was for continuing wind and a warm night with showers and thunderstorms and more of the same the next day.  We are sending the 600k riders good karma vibes.  Hopefully, their ride is going well.
Tags:
Ride Reports
Road Pixie R&R - That's Redemption in Rochester
Cascades 700k is a stunning success!