I will not be cowed, the Adventures of the Dark Chocolate Cow
934 Hits
0 comments
Read More
26 July 2018 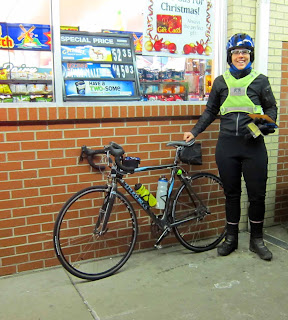 Wind and Snow - A "character-building" and sublime 200K

905 Hits
In a quest to avoid having the Cascades be the superlative of anything, Road Pixie decided that a Permanent in December in Minnesota would be a great idea (of course, many have called me crazy). So I contacted the closest brevet organizer and planned my adventure. Originally, I had hoped this would have been during our stretch of unseasonably warm weather (with highs in the 40s). Alas, that weather ended just before the ride. So this was my first brevet ever in which the temperature never got to the freezing mark. Add a gradually shifting weather pattern to ensure a constant headwind and a start at a balmy 12 degrees, throw in a light snow and very little real sun and you've got the makings of a "character builder".

I met Rob, who was kind enough to call me brave instead of crazy, at the Kwik Trip in Apple Valley just before 7:00 am on December 5. Since both of my normal brevet bikes are either under repair or out of state, I was on my Trek Madone which isn't really set up for brevets, but it was only a 200K (at this point, I don't seem to consider that a long distance). Preparations included doing everything possible to avoid a flat including putting new puncture-resistance tires on with tubes containing sealent. The tires themselves had a light tread which later proved to provide some additional fun. Rob took pictures beforehand; always good to have photo documentation in a case like this one. After the start from Apple Valley, the first stop was Faribault - about 34 miles more or less to the south. A nice south wind was blowing making this stretch much more strenuous than I might have thought. Of course, a 5 mph wind added to the 14 mph bike speed at 12 degrees works out to a wind chill of about -4. Fortunately, I was very well dressed (not too hot and not too cold). I noticed that the previous days' light snowfall was still around on the sides of the roads, a dusting to about 1/4 inch. The sunrise was really beautiful with the cold air as I left Apple Valley so even though I wasn't really making good time, I didn't care. About 30 minutes into the ride came the first nasty surprise: even with electrolytes in my sports drink, it had turned to an undrinkable mush (we're talking solid - can't even drink by unscrewing the top). I stopped at a truck stop near Bagley Road to throw one bottle in a microwave so that I could drink something. One of the truckers suggested adding some vodka, but I really think that might get difficult as a long term solution; I settled for adding additional salt.

The traffic was still light and I arrived at the Faribault control with about an hour extra in the bank. I got a bottle of gatorade, a Starbuck's Double Shot and some peanut butter cups. Fifteen minutes later, I was headed for the Sakatah Singing Hills Trail. I had really been looking forward to this section. It winds through the countryside close to Hwy 60, but far enough away to feel secluded.

Arriving at the trail, I noticed that there was enough snow to completely obscure the pavement and any irregularities. My headwind had turned into a crosswind (at least it was a change), but I found that pushing slick road tires through just 1/4 inch of snow took quite a bit more energy that one might have thought. I could comfortably ride about 12 mph without sliding on the pavement or being jarred by unseen hazards. I saw 2 people, along with hawks, woodpeckers, bunnies, a raccoon and a ton of animal footprints. I considered switching to Hwy 60 to pick up speed but every time I looked, all I saw was semis and no shoulder and the trail was really very pretty. So I stuck it out and I am very glad I did; the skeletons of the trees looked like lace against the sky and there are few things as impressive as a lake on the brink of freezing for the winter.

I managed to be so enthralled that I missed the unmarked turn onto Cty Rd 26 and did some bonus miles riding around Madison Lake. No one seemed to know where Cty Rd 26 was, they just drive by landmarks. Finally I mentioned that I was looking for the Casey's and immediately everyone knew where I was going. I arrived there with about 45 minutes to spare, had a quick bite and bought new chemical toe warmers (Rob had given me two sets, but in the cold they lasted 2 hours, not the 6 advertised). I dumped all the slush from my bottles, filled them with hot, salty sports drink and headed north on 26, at last a tail wind!

That didn't last long. I made the turn onto MN99 just in time for the 10 MPH wind to shift from the south to the east. For fifteen long miles (plus some nice rollers at the end) I had some significant swear words for the wind gods, MNDOT (who neglected to put a shoulder on the road), the continuing cold, and just a few lesser words for the route designer (Rob). There is always a low point on a brevet and this was it. When I finally turned north onto Cty Rd 21, my mood improved considerably - not to mention I got a crosswind. I rolled into the Lonsdale Control just as the sun began to set at about 4:20. I had picked up 30 minutes. I rushed the control since by this time, I noticed the only time I was really cold or wet was just after coming out of the warm stores. I emerged and turned all my lights on. On cue, the winds shifted to the NE so I got a nice new headwind. Despite this, I really picked up the pace. I started seeing Christmas lights after a beautiful sunset. And I only had about 25 miles left.

Some difficulties emerged on Scott Cty 8 with snow. Scott County has apparently decided that their 2 ft shoulders should dedicate at least a foot to a brutal buzz strip. That leaves only a bit left for bikes to ride on. Unfortunately, it was covered with snow making it hard to see where the road ended. Additionally, some very minor melting during the day caused it to ice up in places. This stretch was difficult in the dark with lots of traffic preventing me from just riding on the road. Finally, I got to Dakota County which has really nice bike paths and shoulders.
In Lakeville, many must have been doing holiday shopping since traffic was thick on a Saturday. Only 10 miles to go. I rode on as many roadside trails as possible since it kept me out of traffic. North of Lakeville and into Apple Valley houses were decked out with so many lights I thought there must be some kind of city wide clearance sale on them . Entire streets were covered so this was a really nice final stretch to start cooling down; I actually sang some carols at one point. I also passed an operating ski hill, how many brevets do you see that on!

I rolled into the Qwik Trip at about 7:15. My GPS said that my overall average was about 10.5 MPS and my moving average was 13; not the fastest brevet, but not bad all things considered. My bonus miles total 4 - 131 miles for the day. The cold and wind definitely took a toll - my HRM says I burned more calories on this ride than going up Mt Lemmon. But it was definitely worth it, I can't remember a brevet, or any other long distance ride, that I looked saw so many beautiful things that really made me feel like I was part of the changing seasons.

Female only note: Forget the bra for this kind of ride - I've tried a ton and there hasn't been a decent winter sports bra made that wicks properly. They just trap water next to your skin at the worst possible place. Besides, with the jackets and layers, who's really going to notice?

I left everything on at all times during the controls (I only took my helmet off once) and I spent as little time as possible inside, 20 minutes was the longest. My skin was always dry, but the outer layers of clothing were always a bit damp especially the fleece vest, this is how layering is supposed to work. The inner layers wick moisture to the outer ones where it can evaporate without cooling you off. It works beautifully when done correctly. The secret is to avoid warming up to the point where you sweat enough to overwhelm the bottom-most layer and get it wet. Many in the controls were surprised how little I was wearing, but in all honesty, the goal is to block the wind and keep the core warm. Layers that are bulky make pedaling difficult and don't allow adjustment. It's also good to think about how easy it will be to use the facilities; a long strip-tease in a truck stop stall gets to be a real drag.

Though I adore riding at night, I am also paranoid about being seen. I had two tail lights, one attached to my helmet and one on the bike, which I left on all day, and a headlight. I carry two sets of backup lights just to be certain. I also created my own ankle/leg bands by using reflective clothing tape to put streaks on my shins, calves and thighs. Since these are moving, they really improve visiblity. I also had piping on my wind jacket, a reflective vest, shoes, and gloves. I like putting reflective tape on my gloves so that cars can see a turn signal. Someone actually pulled alongside of me just after Lonsdale to comment that they could see me from a least a mile away. I was glad to get some real feedback not to mention knowing that the pickup slowly following me was not a serial killer.

I plan on riding this permanent again in the spring, summer, and next fall. I think that watching it change will be interesting and that I will see different aspects of the same places. This was unquestionably one of my more sublime rides, but isn't the quest for discovering some new aspect of the road one of the reasons all of us ride bikes in the first place.
Tags:
Ride Reports
New Friends in Arizona: Casa Grande Ruins 200K
Goat eats Lemmon on Ice