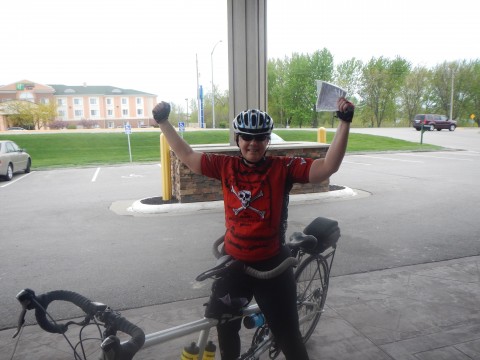 Big Finish - Iowa Populaire on May 2

Anyone who has read blogs from Road Pixie knows who IronK is.  We have been together for 18 years as a team.  We've done the long-distance thing, survived cancer, horrible diseases, major deaths, numerous family crisis, a remodeling job, unemployment, and we started it all in the late 90's when "our type" still identified each other with secret handshakes and "that look" seen on today's sitcoms.  Since it is now legal, we are trying to get married - that is harder than it looks and we are currently bogged down in paperwork.  As our friend, Lisa, pointed out, "it's just amazing that after 18 years, you still want to get married".

That aside, Road Pixie has been trying to seduce IronK into the fold of randonneuring for years.  It started out with teaching her to ride a bicycle in the first place in 2008.  Over time, the general response to invitations to "come ride" has gone from "over my dead body" to "I can do 20 miles", to "I no longer think you are nuts, but still not over my dead body".  That all changed last year when Road Pixie used a trip to Cycle Oregon as an intro drug to distance cycling.  "It's only 60-90 miles a day and well be on the tandem"  Oh and it was the hardest CO in history with 35,000 ft of climbing.  Tandems were not really easy to come by.

So having finished that, IronK managed to get the idea that since she had done 90 miles, she may as well do 100.  Which was last year's big success.

This year, she finally asked about going to the Iowa Populaire.  It's only 79 miles and she had done the distance with more climbing.  Yes, we hadn't had the tandem out since October (it was April), but she was undaunted.  "I've been going to the gym and Zac beats me up".  For the record, Zac also beats Road Pixie up - as much as a 400k beats her up only in 1 hour instead of 20.

So we did the Iowa Populaire and finished with an acceptable time of 6:05.  Which was a thrill and a half especially considering it was early May and it was a sketchy weather day.  At the end of the ride, ironK declared herself ready for 200k.  Unfortunately, Road Pixie had already committed to riding 1600 miles in the next month on her own (because she is a masochistic piece of work).

The weather was to be perfect and 2 days ago, IronK decided that today was going to be the day. 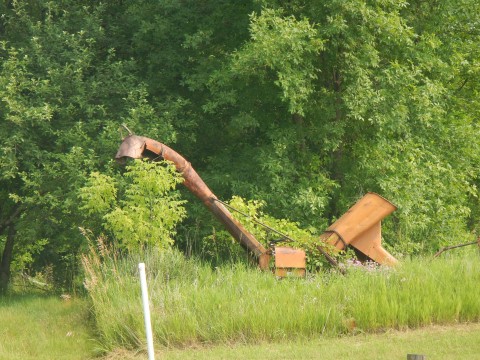 I have always thought this looked like a dinosaur....

​We managed to still get up at 5AM, have coffee and pet cats, which we do every morning (for 18 years(.  She was determined to ride and had moved to the acceptance phase on sure-to-be-painful backside problem.  That is what the heavens created chamois butter, advil, and stoic spouses for.  There was absolutely no wind at all but the forecast was for a breezy afternoon with a southwest wind.  For Cry Me A River (my favorite 200k) this is just about as good as it gets.

Cry Me A River gets it's name from the Minnesota and Crow Rivers which it follows very closely.  It also has all kinds of odd sites on it.  I've seen parades with floats from strip clubs, acute wildlife, and just about everything else a cyclist could hope for.  This particular day, we were treated to swans, killdeer, fawns, adult deer, hawks, and white trash yelling at us to ride on a non-existent bike path. 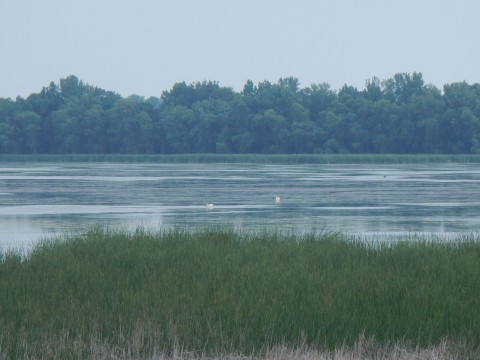 The first 50 miles are the hilly section of the route and are all dead south.  I was so thankful for no wind at all.  Lakes were serene and we could see trumpeter swans gracefully paddling around.  A cloud of sandhill cranes road a thermal upwards, a baby killdeer ran across the road - IronK knows what all these things are.  She has a degree in environmental ecology.  Always interesting to hear about.  We rolled into Henderson with plenty of time in the bank just as the wind started blowing.  We hadn't seen hardly any cars or any bicycles for that matter.  We pondered whether people were still at home hungover or already at the lake.  Temperatures that started in the 60s rapidly ascended to the 80s.  Typically, I'm not hungry until halfway, but this time, I was starving and we had sandwiches, drinks, bugles, and I had ice cream.  IronK decided against ice cream before noon.  She wanted to wait and reward herself at the next control in Green Isle, only 15 miles away. 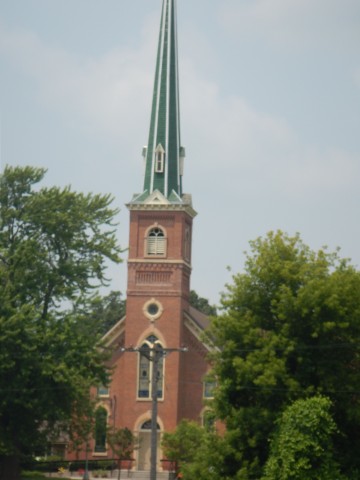 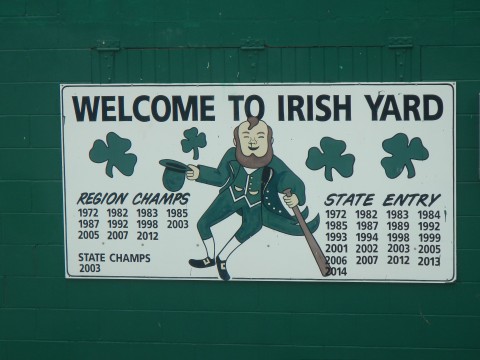 Green Isle is a town that was originally founded by Irish Americans in the 1800s who were totally deceived by advertisements about Minnesota's mild temperatures and long growing seasons.  The city is really into its heritage.  It also boasts one of the nicer cathedrals I have seen in a rural town.  As promised, IronK got her ice cream.  Green Isle is almost exactly halfway so this was good news.  Sure it was hot, but after Florida, nothing Minnesota dishes out seems hot to me and the wind had cranked up to about 10-15 mph so we had a tailwind!  We puttered a little in Green Isle eating ice cream and congratulating ourselves that we had even more time in the bank.  For someone on her first 200k, she does seem to know her way around timings.  It could be that is because she rides with Road Pixie who is unable to ride on any schedule besides the official brevet one. 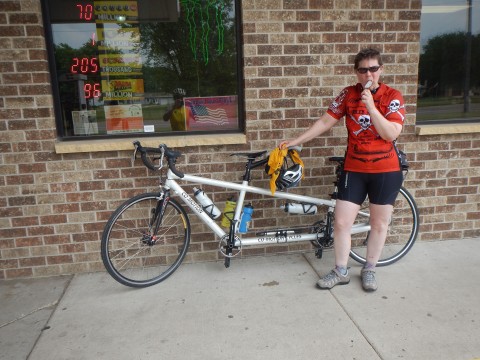 Okay, it's hot and the ice cream is melting. She's in a good mood regardless of what the picture looks like. 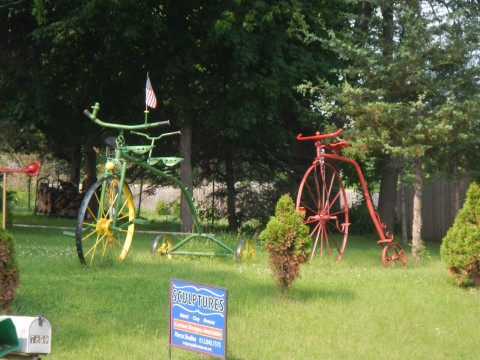 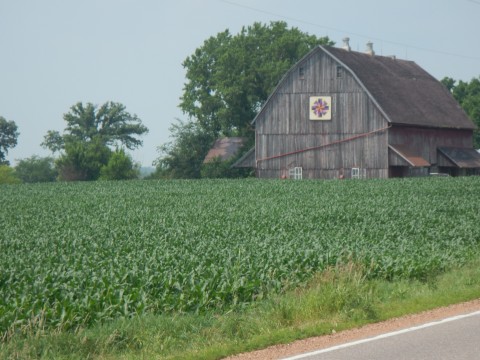 The next 37 miles are far less hilly and full of very interesting barns and other Americana.  I like a barn with a good quilt on it.  We had to make an additional stop in Norwood Young America (which is a really odd name for a town) for extra water since we were going through it like, well, water on a hot day.  That and some extra food to deal with the heat helped everything and we continued to have a tailwind and make stellar progress.  Of course, as soon as we got to Mayer, our luck changed a little with the road being closed for construction...time for another detour and I vaguely remembered this one from years ago.  It turned out to be a really nice detour and far more scenic than the original route.  Fawns jumped alongside the bike (really) and we climbed up and down rolling hills next to a lake passing ranches, old houses and sweeping hay fields being harvested. 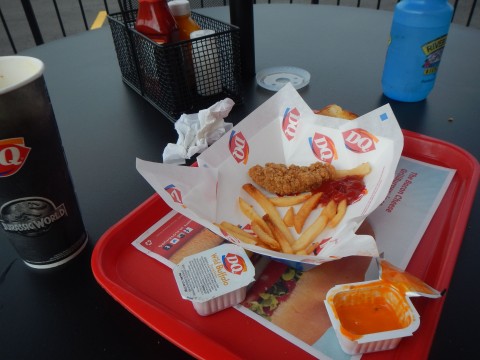 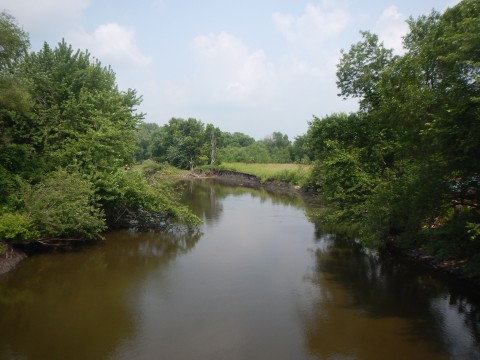 ​More construction in Watertown also slowed us a little but traffic continued to be light.  We wound our way along the Crow River finally coming into Delano.  Here the original control was out of business (bother) but the Dairy Queen next door was just happy to help us out with chicken fingers, fries and an Orange Julius.  In case you didn't know, DQ is a Minnesota thing so thank us every time you indulge in soft serve delights.  At this point, the wind was southwest which wasn't so bad since we were now only 26 miles from the end.  We both felt perfectly fine and enjoyed a delightful ride through the rollers back to Wayzata.

In Wayzata, we found everyone. There were people everywhere. After such a lonely day, it was somewhat odd. The town is also very quick to ticket cyclists who don't put a foot down so I dutifully stopped at every stop sign. Of course, that is a little harder on a bicycle built for two. It just goes to show that if you are going to put a foot down, misstep and unceremoniously dump both partners onto the street, it will be in front of EVERYONE. Many laughed as I sat there with blood running down my elbow. We thus decided to pass on photos of Lake Minnetonka.

We pedaled out of Wayzata, a mere 8 miles from home.   Eastman Road is now officially open and we got to see just how many trees lost their lives in the last 6 months.  The answer is a lot of them.  Kind of sad, at least the pavement is nice now. 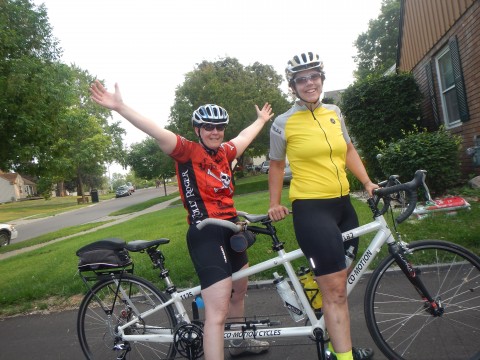