1184 Hits
November 14th started out as a cool morning (by Arizona standards - Road Pixie found 54 degrees to be quite balmy). About 20 riders started the Mt Lemmon Brevet. At 125 miles with a 25 mile climb smack in the middle, it's a challenging brevet no matter how you slice it. Added to that is the fact that when you aren't climbing, you are riding an urban ride complete with traffic, stop signs and lights. Mt Lemmon itself is quite spectacular. It starts out as desert with cactus, then becomes scrub land, then large boulderscapes, finally morphing into pine forests. The pavement is near perfect with only one tiny section under repair at mile 10. Speaking as someone who comes from a state with lots of bumpy roads, the pavement on this ride was like glass. 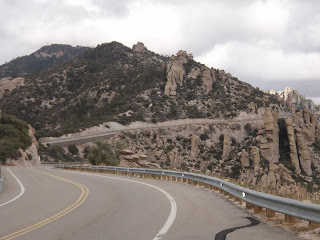 Hats off to the organizers of this adventure. They provided 2 stops the first at Windy Vista, about 16 miles up the mountain, had hot chocolate, Ramen noodles, cookies, etc. Since the high for the day in the valley was about 67 and it snowed on top of the mountain (above 8,000 feet), they also provided drop bags. At first I thought having the clothing drop 5 miles before the turnaround was odd, but it really is the very best place to do it. By the time you get to the Palisades, temps are dropping and this day did not have much sun. It was about 40 degrees and I was happy to put on some of my fall gear (especially leg warmers) before the trip to Summerhaven (the turnaround). The biggest shock of the ride was the fact that there are 2 major climbs after the big 20 miler and they felt like the steepest of the trip. The first 20 miles of the mountain are a steady 5%-8%, very easy to hit tempo and keep going. Then you hit the palisades and have about a mile of climbing until a steep 2 mile descent, then another climb and a final descent into Summerhaven for the turnaround. During the final climb on the way back to the Palisades, it started snowing then ice balling on the descent to the Palisades. Ice balls sting when hitting you in the face at 25 mph!

At the Palisades are drop bags and another big round of food including delicious wraps hand made by the ride coordinator, Susan. Road Pixie normally does controls as quickly as possible, but had to hang out at these 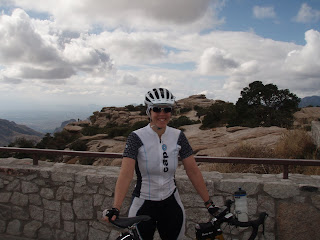 considering how nice they were. It was also nice to get to know new riders including a group of 3 from Utah. The Utah crowd consisted of a guy in his 40s-50s, his son (who was just getting his driver's license), and an older gentlemen in his 60s. I finally passed them at about mile 100, but I assume all three finished. I am impressed that a 15 year old finished this brevet.

I did screw up my directions just after control #2. I was so amazed by the approaching sight of the mountain that I missed a turn and did 5 bonus miles at the foot of the mountain. Serves me right for ignoring my beeping GPS. That took about 20 minutes or so off my time and I ended with 130 miles in exactly 12 hours clock time and 10:15 riding time. The big climb started at 10:15 and I hit the Palisades at about 1:30 and Summerhaven at about 3:00.

The final 5 miles to the finish were on Moore Road in northern Tuscon. After 28 miles of sprawlish riding, this road was completely dark and not a car or house in sight. Beautiful stars shown down and I am now really looking forward to more night rides in the desert. It's a completely different kind of terrain from Minnesota. Not much in the way of rolling; you are either doing a sustained ascent, descent or in the flats.

I was also really impressed by the bike lanes in Tuscon. They are set up so that the right turn lane is to the right of the bike lane with cars yielding to bikes to turn right. It really works quite well and puts a stop to the annoying problem of standing at a light in the right lane and wondering if everyone sees you.

In the book keeping department, these brevets use receipts instead of having the cashier sign the card. I can see the advantages of both since I almost always buy something anyways. But there is something kind of nice about handing your card to the cashier. Since our RBA maintains relationships with the quickie marts, they are aware of how long the ride is and usually offer some kind words. Somehow that makes me feel more connected to the places I am riding through - very subtle.

A final note is the performance of the Golden Goat on this ride. I am very pleased with the gearing setup. The compact cranks and the 11x32 cassette was excellent for this ride. Heart rate monitor shows that the entire climb was aerobic, even the steeper parts. I never felt like I had to apply major pressure to get up the hill - it was one big, fast spin. Most of the time, I tried to stay in the 30 or 28 cog, reserving the 32 for resting. But I will have to work on climbing speed. At my favorite climbing tempo, about 80 rpm, the lowest cogs put me at 5-6 mph. I'd like to develop some more power so that I can push the 28 or 26 cog comfortably at tempo. That will cut the climbing time a bit for the oncoming Cascades.

This ride was so nice, I am now looking at planes for New Years. The next AZ Brevet is the 200K Casa Grande Ruins. It's also nice to see Dad and my sister (I'm lucky to have family in the area).
Tags:
Ride Reports
Wind and Snow - A "character-building" and sublime...
Mt Lemmon Approaches