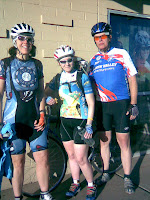 hi. This is all part of the camaraderie aspect of the sport that I personally find to be a real treat. After having some really nice turkey wraps, Bob, Lorraine and I headed back.
I had some real trepidation about my knee, but the rest of the ride was really a gradual downhill and we made really good time without pushing it too hard. Bob paused to take a telephoto shot of a house up in the hills (we debated whether it was actually there or not). By the time we got back to the bike shop it was about 4:30 and the swelling had disappeared from my knee. In fact, it felt better than it had all day. Go figure!
Major kudos to those that helped me out on this ride. I think I would have finished, but I would definitely not have had as much fun. It doesn't always work out that people hang as a team, but this was really a treat. I hope to see both of them for the 300K in February as well as the many other new friends in AZ.
Tags:
Ride Reports
Road Pixie's Advice to the new Randonneur/Randonnu...
Wind and Snow - A "character-building" and sublime...