Iowa, North Carolina and the Ride of the Year

So come October 3, Vincent, Lara, and I packed up her bike and a tandem to do the Leaves and Lights 200k in Iowa.  I'd had this ride on my scope for a long time since it features the High Trestle Trail which at night is stunning to ride on. The wind forecast was equally stunning.  From the south moving to the west at about 20-30 mph.  Of course, for the first 50 miles, that was great.  We started out at Madrid, IA at noon.  Gear Bob was also making an appearance on his brand new frame.  Always nice to see Greg C, the local RBA as well. So we were off.  The four of us were together until the first control at Ames.  Then Gear Bob took off needing to get home early.  On the tandem, Vincent and I were a pretty effective wind shield and by the time we got to the second control the wind was in full force.  The Kum and Go also featured pumpkin pie, a serious treat for hungry people.  But we didn't really get much since the next control at Lehigh was to feature homemade pie! The 30 miles into Lehigh were really tough, straight into the wind and not  agree in sight.  We made slow but steady progress and unfortunately realized that it is NOT a good idea to break in a Brooks saddle on a fall ride on a brevet.  Poor Vincent, it's a good thing I ride captain on the tandem.  It would have been hard to stare at a backside in such need. In Lehigh, we discovered the town was very small.  There were also cats and dogs everywhere.  As we pulled down the 200 yard main street, I must have been bonking because I found us running out of road with a stray cat in front of us.  Not wanting to hurt the poor thing, instead I unceremoniously crashed into a building.  At this point, even though maybe 50 people lived in the town, we found out that all of them had been staring at us as we crashed since they all ran into the street to ask if we were okay.  Yes, crashing into a building at 4 mph is major news.  Pecos Lara was on the ground laughing. So we dusted ourselves off and walked across the street to the cafe with the pie.  Alas, the waitress was just not interested in serving us.  After a couple of others showed up after us and got service, we politely apologized and left.  One of the patrons followed us out an apologized for the bad service.  That was quite nice.  So we hit the gas station instead.  A bag of chips, salsa and a can of soup later we were fighting for our food with the aforementioned cats and dogs.  But it was still really fun. The last 50 miles were in the dark and very fun if not just a little chilly.  But we arrived in due time to the trestle trail.  Of course, a psychedelic bridge is even better when it is also being manned by stoned teenagers with fireworks. High Trestle Lights: The Movie Leaves and Lights Pictures So the 200k was finished and only one 300k to go.... 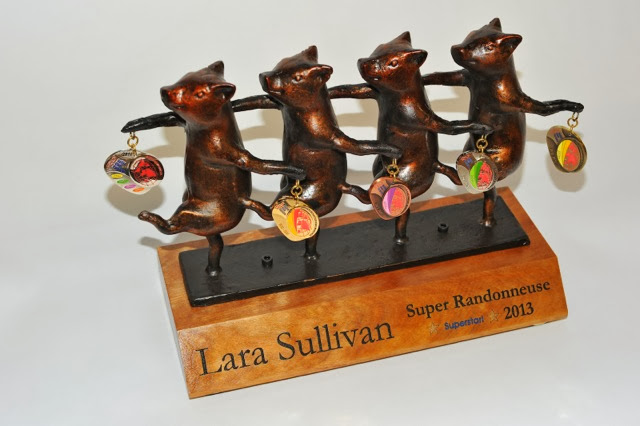 Sure, we had to shop quite a long time to find a bronze statue with 4 dancing pigs and sure we had to weld on loops and create a base, but frankly hers is the most inspirational riding story I am ever likely to hear and I can't even begin to say how nice it is to call someone like that a friend. Lara gets Rider of the Year in my book!
Goldilocks and the Three Loops: Road Pixie Returns...
The Accidental K-Hound