1198 Hits
This year I had no illusions about the K-Hound (basically 10,000k on the RUSA calendar).  I had a blast doing it in 2012 with all my friends cheering me on.  2013 had LEL as a major ride and I knew that it wouldn't count and with all of those K not counting and the need for both tapering and a vacation afterwards, K-Hound status just wasn't important.  I had spent 11 months bleeding from a colitis outbreak so I was counting my lucky stars that I had accomplished all that I had.  Of course, I also had the North Carolina 400k in October to thank for the discovery of Geritol, the magic elixir that somehow brought the colitis to heel.

Imagine my surprise when Pecos Lara (possessor of the greatest RUSA comeback of the century) emailed me in early December to tell me that RUSA had taken over the K-Hound from the Lone Star Randonneurs and that foreign events would count.  "You are only 530k short", she said most emphatically, "you can't not do this".

Okay, it was 5 below with snow on the ground and it was December 3rd.  Looking at the long term forecast was dismal - the coldest December in 20 years and that's saying something in Minnesota.  That had all the appeal of a light vivisection.   Then I thought of Arizona, after all Pecos Lara was there.  Maybe that could work?

Then Iron K's father died suddenly and everything just collapsed.  In the horrible stress that followed, I just went ahead and booked airline reservations anyway.  I really wanted to see Dad anyway, you should always appreciate people while they were around.  So I got tickets to Arizona for the 5 days before Christmas.  Of course, that left me only 2 days to do 530k.

So I had to figure out how to do that.  Lots of questions to figure out whether to ride in Tucson or Phoenix, which rides and who.  In the end, the Extreme Picnicking group and the new Arizona RBA came to my rescue along with Pecos Lara.  We would do 3 permanents in 2 days.

The first 2 were with Carlton and Ryan and Ilyssa who I don't get to ride with nearly enough.  We all met at Carlton's for the Saguaro Lake 123k.  For once it was cloudy in AZ and the temperatures never got out of the 50s.  It was also a bit chilly by AZ standards, though I still counted the 50s as thawing. I loved the ride and finished with a side trip to In and Out Burger with Ryan.  Carlton offered up his house for a rest and Ryan and I took off on the Bush Highway 100k.   Of course, it was nearly the same route in reverse, but hey, it was gorgeous both ways!  Lots of climbing - us pasty Minnesota types are just not used to such climbing.  But I at least did okay.  Ryan and I toasted each other at Streets of New York to finish!  2 down and 1 to go. 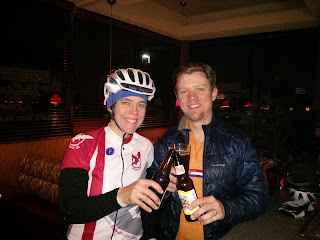 IronK picked me up at the finish and we rendezvoused with Pecos Lara at the La Quinta in Scottsdale.  A couple of pieces of pizza later and I was out for a whole 7 hours.  Up again and Pecos Lara and I met Mike S for the Vulture Mine 309k. Okay, I hadn't perhaps realized what lousy shape I was in.  The Vulture Mine was a great ride and I loved it enough to make most of it into a 200k permanent of my own.  We had our share of "challenges" including the partial destruction of my front tire and an emergency booting.  I think the highlight for me might have been the low nighttime temperatures.  Sure I was tired, but 42 in the wind is darn cold.  I finally coped by covering my lower legs with Subway bags and napkins.  Looks really nice by the way and it works! So there I was at 1:00 am in Scottsdale with IronK and Pecos Lara, the one who really thought I could do it.  Sure, I spent 4 days walking like a zombie, but spending all that time with people who so wanted me to achieve a goal was an experience I will never forget.  It was the most special end to a season I could ever have asked for.

So now I am sitting with 8,602k and LEL will total up to 10,000k.  Considering all the challenges of the year and all the things that happened, no one is more amazed than I am.  But it just goes to show that randonneuring is all about camaraderie.  This year, I'm converting to an Arizona Randonneuse - I've even got a new 200k, the Bone Dry 200k to honor Dad.  I start and finish every year there anyway.

So here I am the Accidental K-Hound.  No one is more surprised than I am and I feel like I really owe half of it to Lara, Ryan, Carlton, Ilyssa, IronK and all the people that helped me get through it.  It's a remarkable end of the year.

So for the end of the year, thanks to everyone that rode with me throughout the year.  I couldn't have done it without all of you.
Iowa, North Carolina and the Ride of the Year
The almost-not-400k