We are all hurt from time to time.  How we deal with it defines who we are. 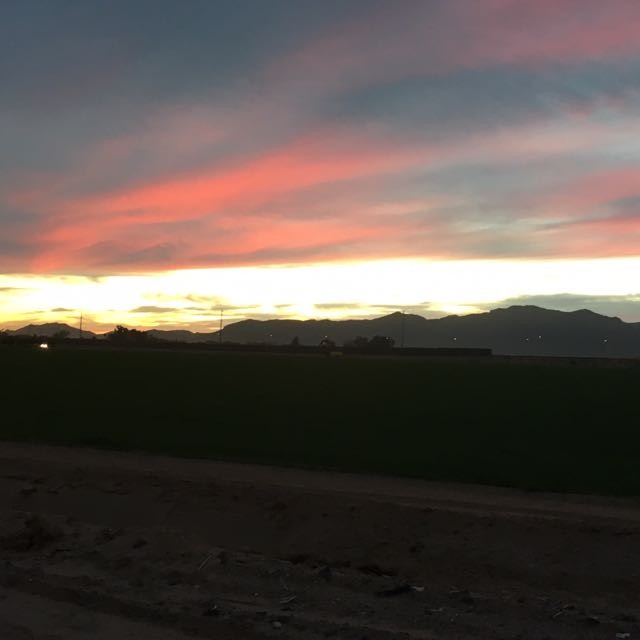 There was a time not so long ago when the thought of riding a bicycle was so absolutely terrifying it brought tears to my eyes. The idea of moving at a high speed when anything could come along and knock me over was an overwhelming mountain of fear. It was like a ferocious patch of kudzu that seemed to take root in my psyche and grow uncontrolled, moving from the bike to every area of my consciousness. Those were dark, dark days that seemed endless. I remember being so exhausted and in pain during my neuropsychological testing that they stopped the test. As I sat in a darkened room trying to quell both my thoughts and a wailing headache, one of the doctors came to see me. He sat down and said that as bad as this seemed, he believed I would recover.

There was a lot more to it than just those words. Strangely enough, the fact that I actually understood that I was hurt was a really good sign. Less than a week after the accident, I had been convinced that I would still be able to ride a Super 600k in 3 days, that there wasn't anything really wrong. My primary care physician had to call IronK personally and tell her to cancel my plane ticket. It was pretty much all downhill from there. But still the bike remained a shadowy, menacing thing that seemed like something to be avoided at all costs. I'd done everything already – 8 grand randonnees, the Mondiale, what more did I really need? I could be an RBA and be happy just putting on rides. There were several people who had very different opinions. Thank goodness.

I've always known that the bike was a release, an escape, the way I managed the stresses that are inevitable in life. Losing the bike after the accident was the worst possible setup for me to heal. In retrospect, I should have found a way to stay on it in some way even if it was for 5 minutes a day. But the world of TBI treatment is not a standard or exact science. What I now know was best for me might have been wrong for someone else too.

At first IronK, my spouse of 18 years was okay with me just focusing on getting through the days. Every night, I would slowly fall apart from building stress, headaches, mind fog and dizziness. By the end of November, she had had enough of that. "I love you, and I know you need your bike to be yourself. We have to find a way to get you back to it". She started dropping hints about doing Cycle Oregon together in 2016. My friend Vincent started calling about plans for fixing the bike, still sitting in his shop in need of repairs from the accident. I went to see my oldest friend, Kendra, who reminded me that it took 4 years to learn how to speak the first time and that I was way ahead the second time.

But the final push came from somewhere both obvious and unexpected. Part of recovering from any trauma is accepting that you won't be the same again. You have to forgive yourself for your "new" limitations and hopefully use them to build new strengths. Of course, much of this might all be your brain settling back into a stable level of neurotransmitters too. But in facing those fears, I had to go and see Lisa so that both of us could finish the 1200k we had started in August, but never really quite finished. I think that trip, which had no riding at all, might have been the real turning point. I told her I would never ride again and she looked me square in the face and said, "I'm still not giving up on you as a riding partner". Though we both seriously doubted we would ride at all the following year, sometimes it just takes the right person to put the keystone on an idea, to remind you that all journeys are a series of small steps that add up. A week later, I went for a long visit with Dad in Arizona and he got me back on my bike – for 6 miles at 9 miles an hour. Then 12 miles, then 15, then 20, then 40. He blue-toothed a speaker onto the back of his bike and played James Taylor as we tooled through the suburbs. As scary as those rides were it turns out that riding a bike is, well, a lot like riding a bike - you don't totally forget how to do it. But it certainly can feel VERY different too. 12 miles an hour can seem awfully fast. 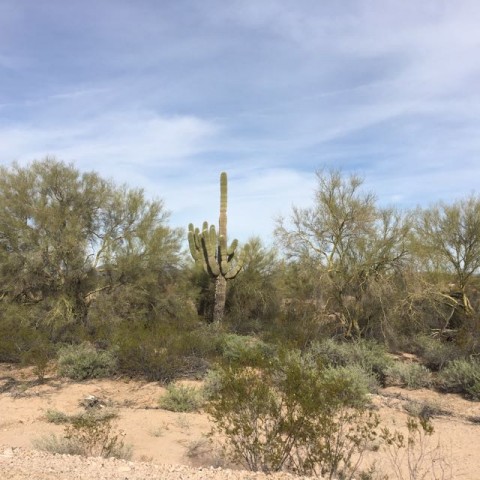 Stately saguaro of the Arizona desert

I got back from Arizona with a new frame of mind. I'd done a month of intensive speech therapy and was spending hours a day working on concentration and various therapies as I listened to classical music to simulate multi-tasking. And I started spending time every day on the elliptical in our basement – each day just a little longer and a tiny bit harder. Between jobs, I decided to return to Arizona. January is year of beginnings and if I was going to start something, it seemed like January was the month to do it. With massive trepidation, I started thinking about what a 200k permanent would be like. It sounds so benign, but to someone who hadn't been on a ride in months, had balance issues, major vision changes, and maybe a little PTSD, it might as well have been up the side of Mt Everest. There is no such thing as "just a 200k" and this one was a really big deal; anyone who has ever ridden a brevet knows it's only in your head to start with. Psyching myself for this was the hardest thing I've ever done – harder that any Grand Randonnee. 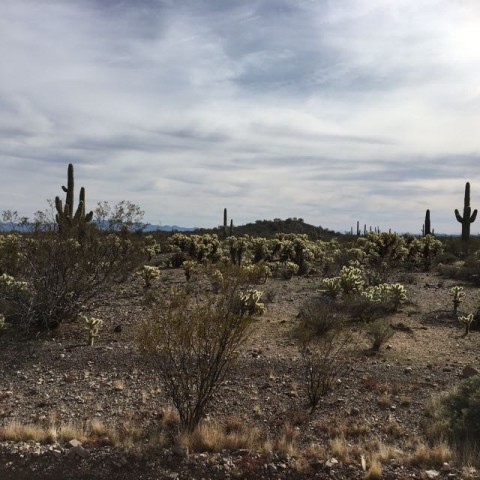 And even though her favorite 200k was the same weekend, Lisa would drive 5 hours to Phoenix from San Diego to ride it with me. The permanent we would ride is one I own that starts about a quarter mile from Dad's house. Only 3,200 ft of climbing, but most of it packed into a 40 mile false flat right in the middle. Some stretches were isolated, but I would have to face traffic too. Then 4 days before the ride, I got an email from Lisa. "My life has completely collapsed in the last 24 hours – if I don't sleep, I may not make it". Though the nature of the collapse is a story that is not mine to tell, she wasn't exaggerating. I told her to come anyway if she possibly could. And the ride went from being one person's reinvention to that of two. We had ironically been on parallel paths of change without knowing it all along.

The ride itself I will always remember in minute detail, not because it actually was single most difficult 200k I've ever done, or that I finally saw the demons of the accident moving to the rear view mirror, or that when we saw the sun set over the White Tank Mountains, it was so beautiful that I had to stop my bike and stand there with tears in my eyes. I'll remember it as a ride where two people and a great friendship rose from the ashes of shattered dreams and found that the future still holds great things. It was as if we had both discovered long-lost sisters - that we both had roles, however small or large, in each other's lives. 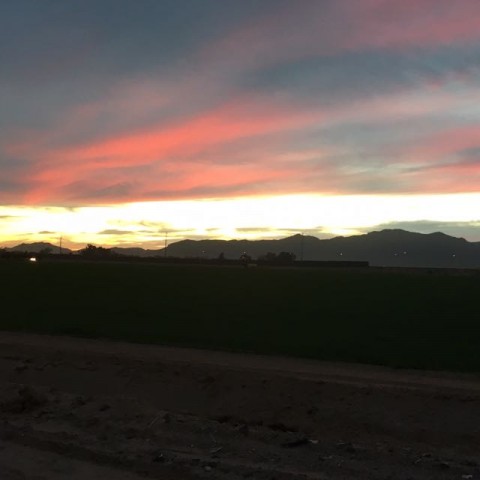 I've always thought that people are the most successful when they lift each other up and that together we go farther than we ever can alone. That even in the depths of stress and darkness, there will be a light somewhere to lead the way. For that matter, you never really know whether you might actually be that light to someone. It's so easy today to go through life trying to change yourself, change the people around you, think that you are just around the corner from "success", but life just doesn't work like that. The journey is what is important and it's the many people who you travel with that not only change where you go, but help you see the many details that make the trip worthwhile in the first place. 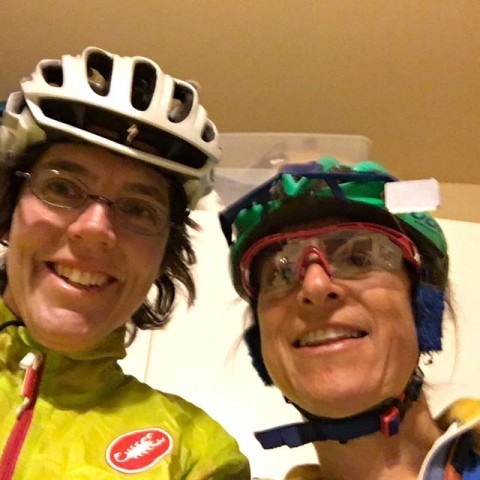